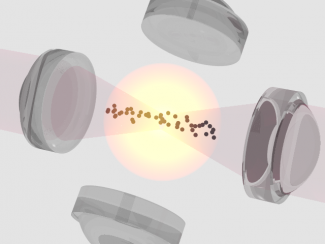 Thesis defense of Antoine Glicenstein, PhD student in the Quantum optics group, on 18 January 2022 at 2pm in the auditorium of the Institut d'Optique Graduate School in Palaiseau, on the topic: "Collective spontaneous emission from dense ensembles of two-level atoms".

Abstract: "We are interested in the problem of light scattering by dense ensembles of cold atoms in the so-called "Dicke regime", in which many atoms are trapped in a volume whose dimensions are smaller than the wavelength of the atomic transition. When the medium is dense and the frequency of the light is close to that of an atomic transition, the light-induced dipoles interact with each other. These resonant interactions between the dipoles modify the collective response of the ensemble. In particular, they modify the rate at which the ensemble de-excites by spontaneous emission. A faster de-excitation than that of a single atom is called superradiance and a slower de-excitation is called subradiance.

In this thesis, we first develop experimental methods for the study of this problem, allowing us to prepare, observe and manipulate dense clouds of two-level atoms containing several thousand cold atoms in a regime close to Dicke’s regime. We then study the collective emission properties of these systems under resonant laser light, during and after excitation. We observe super- and subradiant de-excitations for the first time in our group and show that they are governed by the number of atoms in the cloud. We have then characterized the collective Rabi oscillations of ensembles of atoms under the effect of light. Finally, we demonstrate a protocol for the on-demand release of excitations stored in subradiant states, which is a prerequisite for the realization of light storage."