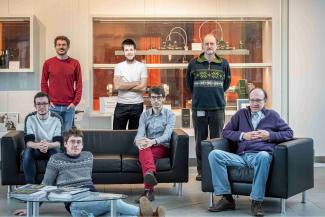 We make use of Bose-Einstein condensates (BEC) of metastable helium atom (He*) to perform interferometry experiments inspired by quantum optics.
A remarkable feature of the metastable state of helium is its very large internal energy (20eV), allowing the use of a single-atom resolved detector, based on the electron amplification.
This detector is called a microchannel plate (MCP) and provides three-dimensional data in the momentum space of the atoms.
Thanks to the nonlinearities of BECs, we have also designed an atomic source of non-classical states, whose statistics and correlation properties can be probed with atom interferometry techniques.

The experiment in pictures

The Micro-Channel Plate of the team, protected with a "pastille".

The experiment view as it was in June 2020. It changed a bit since that time.

The software HAL, created by A.D. is a Python based image analysis software for atom experiments. It is still used and developped by the team and the future PhD candidate will be part of this developpement.

Group picture of the team on the MCP detector. Changing the MCP is quite a challenging task given its huge size !! 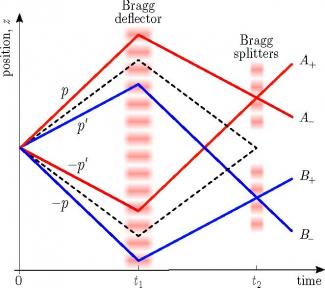 (The position is now filled).

We have perfected methods to detect cold atom clouds released from a trap in three dimensions and with single atom sensitivity. We have been using this method to perform fundamental experiments on correlations and entanglement produced by non-linear processes in Bose-Einstein condensates. An example is our observation of the Hong-Ou-Mandel effect [1].

The group has recently developed a two-particle interferometer in momentum space [2], see figure. Starting from a two-particle entangled state, |p,-p〉 + |p',-p'〉, this configuration can test a Bell inequality. This would be the first time that such inequalities have been tested for the motional degrees of freedom of freely falling, massive particles.

To perform a Bell test in this configuration, it is necessary to have interferometric phase control (𝜑A and 𝜑B ). A first part of the internship will be to implement the phase control and check it on a standard one-particle interferometer. Preliminary experiments are underway to optimize the stability and speed to produce the expected entangled state; the intern will participate in it. He/she will then participate in the Bell experiment i.e. acquisition of the data and its analysis.

We use a non-linear process in a Bose-Einstein condensate to produce entangled atom pairs reminiscent of four-wave mixing in optics. The condensate is loaded in a moving optical lattice. The band structure of the lattice modifies the dispersion relations of the atoms so that correlated atom pairs are produced spontaneously. This process is slightly multi-mode and therefore the resulting state is multi-particle entangled. An extension of the proposed scheme to look at entanglement on a larger set of modes is also envisioned.

Do not hesitate to get in touch with Chris or Denis

We have used a variant of the Hong Ou Mandel setup described below to realize a two-particle interferometer with four input and four output ports as shown in the figure. The source generates atom pairs in a superposition of different momentum states:  |ψ) ~ |p,-p) + |p',-p').  When such a state is injected into the atom interferometer, the probability of detecting an atom at each output port is 1/4, independent of any interferometer phase. The correlations between the different output ports however do vary as a function of the relative phase of the two closed circuits (red and blue in the figure). We have demonstrated this effect in our apparatus. An improved version of this experiment can lead to the violation of a Bell inequality involving the motional degrees of freedom of freely falling massive particles. 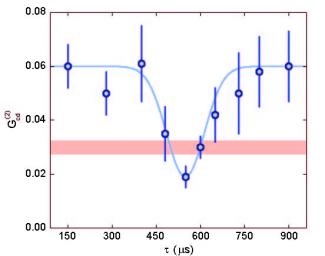 The Hong Ou Mandel (HOM) effect is a remarkable illustration of 2 particle interference. Two identical particles arrive at the input ports of a beam splitter. If they are perfectly overlapped, they never exit in opposite output ports. The effect is well known for photons. We have recently performed the analogous experiment for atoms.

A BEC has sufficient optical thickness to act as a gain medium. When an elongated BEC is excited by a laser beam, the gain causes the spontaneous emission to be preferentially directed in the elongated direction, in so called endfire modes. Since it involves considerable gain and is highly directional, this emission resembles laser emission. We have measured the intensity (2nd order) correlation function of this emission and found that its statistical properties resemble those of a thermal source rather than those of a laser. We do this by observing the recoil of each atom undergoing a superradiant scattering process. Our detector allows us to construct the 2-atom correlation function and thereby infer the correlation function of the emitted light.